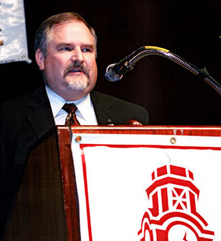 Georgia is working on a math curriculum that’s very different from the other states, seeking to remove the achievement gap among groups of students to attract jobs, Georgia Superintendent of Schools Kathy Cox told the audience at the Greater Rome Chamber of Commerce’s annual meeting Thursday night.

“If we can do that, Rome, Floyd County and the Greater Rome Chamber of Commerce will be able to attract industry like you wouldn’t believe.“

Cox was the guest speaker for the even.

She also said it was critical to educate students for 21st century jobs-“probably the hardest part” of the state’s goals because it’s an unknown.

Cox also focused on improving graduation rates and the progress the state has made, and praised the Rome and Floyd County public school systems for numerous academic achievements.

Earlier in the evening, the chamber presented member awards.

“Our 2008 Ambassador of the Year was seen frequently last year,” Greg Sumner, founder of Professional Screening and Information, said in presenting the award. “(She) was truly a model ambassador through recruiting and mentoring new members.“

“To the other ambassadors, I couldn’t have done this without you,” Chumbler said, “I look forward to a successful (2009) as we reach out to business in our community.“

Sumner, a former winner of Ambassador of the Year and last year’s winner of the Small Business of the Year award, also presented the latter award to Lee Jennings, owner of accounting firm RL Jennings & Associates.

“(Jennings) has graciously given time and energy to the chamber in numerous roles, including the Economic Development Committee,“ Sumner said.

Jennings thanked God, his family, employees and clients. “Without you we wouldn’t be here,” he said.

Other finalist for the Small Business of the Year award were Big Time Products, Midian Roofing and Paula’s Silver & Gold.

The meeting also saw the passing of the gavel from Randy Quick, 2008 chairman of the chamber’s board of directors, to David Newby, 2009 chairman and general manager of Profile Extrusion.

“I fully realize that this year we are in a cycle of a different kind of worldwide economics. Some might eve call it a crisis,“ Newby said. If indeed it is, it is my strong opinion that a crisis is a terrible opportunity to waste.

“It is during times like these that our decisions as managers and leaders mean the most.“

“It is during times like these that we are called upon to make the hard decisions…. We will not allow the current crisis to paralyze us to inaction, but rather we will let it energize us to continue to work creating jobs, investment and prosperity for our community.“